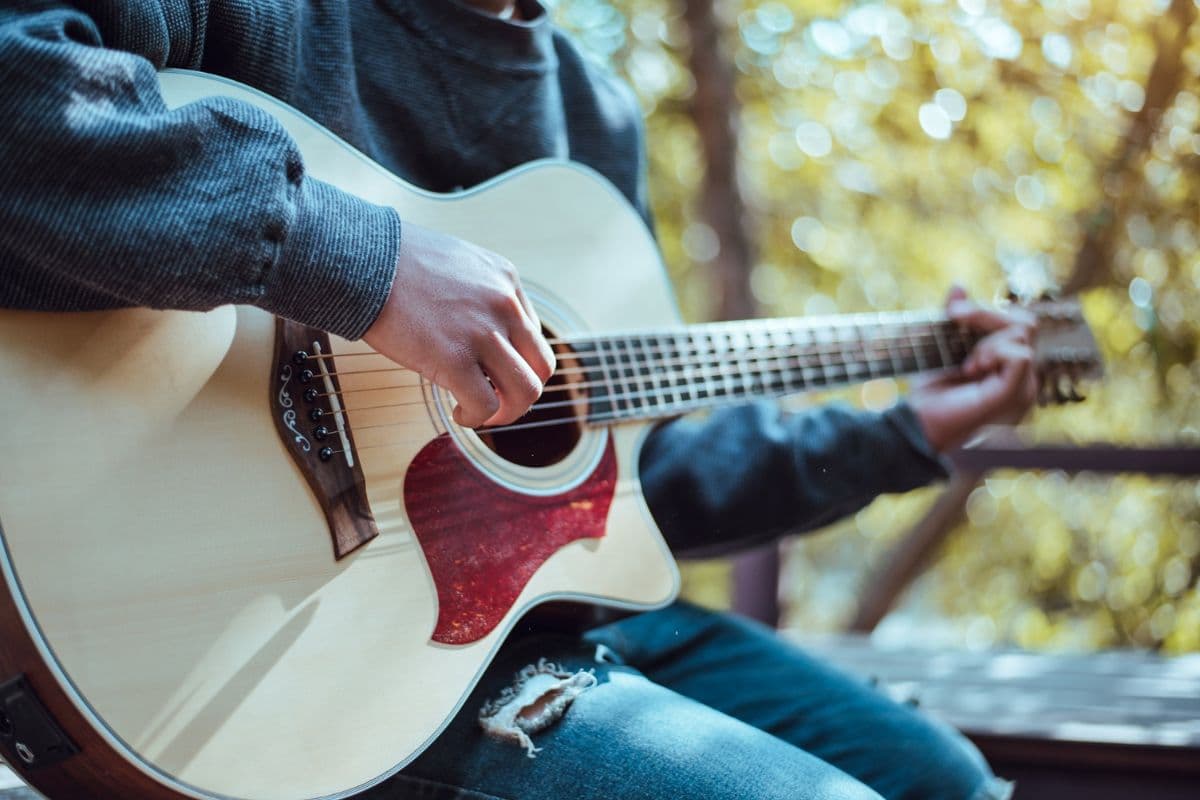 Making your acoustic guitar quieter means you can play it at home, at the park, or anywhere you want without disturbing other people. It’s also an excellent idea if you have neighbors who complain about loud sounds or roommates who don’t want to hear you play the guitar late into the night.

In this article, we’ll show you how you can make your acoustic guitar quieter with high-quality products and at-home modifications. We’ll also mention playstyles that are better for quiet guitar playing.

Put a Shirt in the Sound Hole

According to Guitar Gear Finder, stuffing a guitar’s sound hole with a shirt is one of the most well-known ways to reduce the sounds. Large guitar bodies resonate sound much more, so stuffing a shirt into the space will reduce the area for the vibrations to resonate. When there’s less room for the sound to sustain, there’s less overall volume.

Lighter strings are much thinner than heavy strings. They’re the best choice for people who have trouble fretting their favorite chords, but they’re also an excellent option for fingerpicking. If you want to produce less noise when playing the acoustic guitar, we suggest looking for a lower gauge for every string.

Feedback dampeners connect to your guitar’s soundhole. Since the vibrations and noise come out of the sound hole, you can instantly quiet the instrument with various dampers. Find the right size for your acoustic guitar, then choose the thickness and density. Thicker, denser materials dampen the sound much more.

The D’Addario Planet Waves Feedback Dampener is designed to fit most acoustic guitars. The thick material prevents too many sounds and vibrations from coming through the soundhole. However, you’ll still be able to hear enough to practice your favorite chords and strumming patterns.

Fingerpick Instead of Strumming

Fingerpicking is often seen as a bit more challenging than strumming. However, it’s much quieter because there’s less pressure and fewer vibrations. You can practice your favorite melodies and combine fingerpicking with hammer-ons, bends, and pull-offs. Some of the best acoustic guitar solos use fingerpicking, so why not give it a shot?

You can mix fingerpicking with thumb strumming if you don’t want to be too loud. Speaking of which, strumming with your fingers is always quieter than using a pick.

Acoustic silencers are soft pads that gently touch each of the strings. They often sit near the saddle, providing strong sound dampening. The best part about using acoustic silencers is that they won’t slide around, scuff your guitar, or ruin your chords. You’ll be able to hear the strings, but your roommates and neighbors won’t have to.

The Dilwe Guitar Mute Silencer is a universal acoustic silencer that drastically lowers your guitar’s sound output. While you won’t be able to hear as much intonation as the aforementioned feedback dampener, you can still get a solid practice session out of it. Fit it to the base of the strings and strum as hard as you want to.

Mute the Strings With Your Palm

Muting your guitar strings will make them close to silent. However, you’ll still be able to hear minor key changes, which makes this technique a great choice for beginners. If you want to play your guitar at night or in a quiet place, it’s an excellent idea to master the art of palm muting.

Soundproof Panda shows palm muting can be done by putting your strumming hand’s pinky on the strings.

However, you should remember these palm muting tips:

Thin picks are often easier to use, a bit cheaper, and more flexible. They’re also more forgiving because they’re not as loud as thick picks. If you want to play a bit quieter, reach for the thinnest pick you can find. While it won’t cut down the noise as much as some of the other suggestions above, it’ll definitely make a difference.

So, why does pick size affect your acoustic guitar’s volume?

Fender Classic Celluloid Guitar Picks come in a 12-pack of thin picks. You can choose other thicknesses if you prefer less flexibility. The ultra-flexible design pairs well with any acoustic guitar, especially those with light strings. Every pack comes with several color combinations, so there’s don’t doubt you’ll end up with the perfect one for your playstyle.

If you go with a thinner pick to make your acoustic guitar quieter, we suggest pairing it with light strings and lower action. These three minor adjustments could be exactly what you need to enjoy your instrument without making too much noise. Let’s talk about lowering the action in the following section.

Lowering the action will undeniably lower the volume coming out of your guitar. It’s important not to have it too low, or you’ll end up with buzzing strings. While it’s recommended to keep the high E at 2.0mm and the low E at 2.8mm, you can mess around with these dimensions to find the perfect setup for your instrument. However, keep in mind that the guitar shouldn’t bow.

Here’s the easiest way to lower your acoustic guitar’s action:

Place Something Soft Under the Strings

Tone Topics claims you can put all sorts of padded objects under the strings to reduce an acoustic guitar’s sound output. For example, you can use folded towels, microfiber cloths, shirts, socks, and many other items. Reducing the acoustic guitar’s vibrations will make it significantly quieter every time you strum it.

Keep these details in mind beforehand:

There are countless reasons that you could want to make your acoustic guitar quieter. The good news is that you’re now well equipped to strum and fingerpick without making too much noise. Enjoy your favorite instrument without sacrificing clarity and practice wherever you take it.